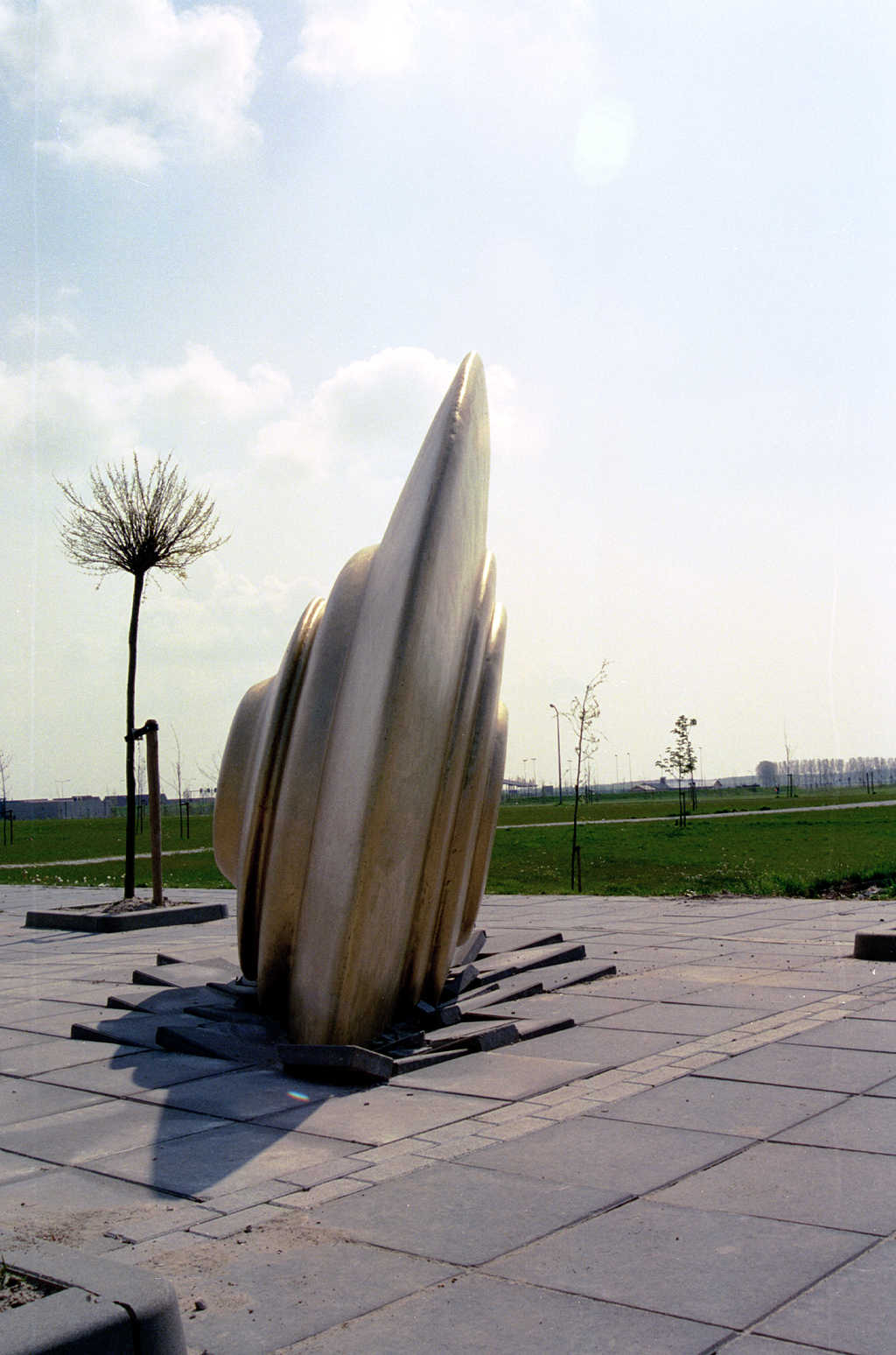 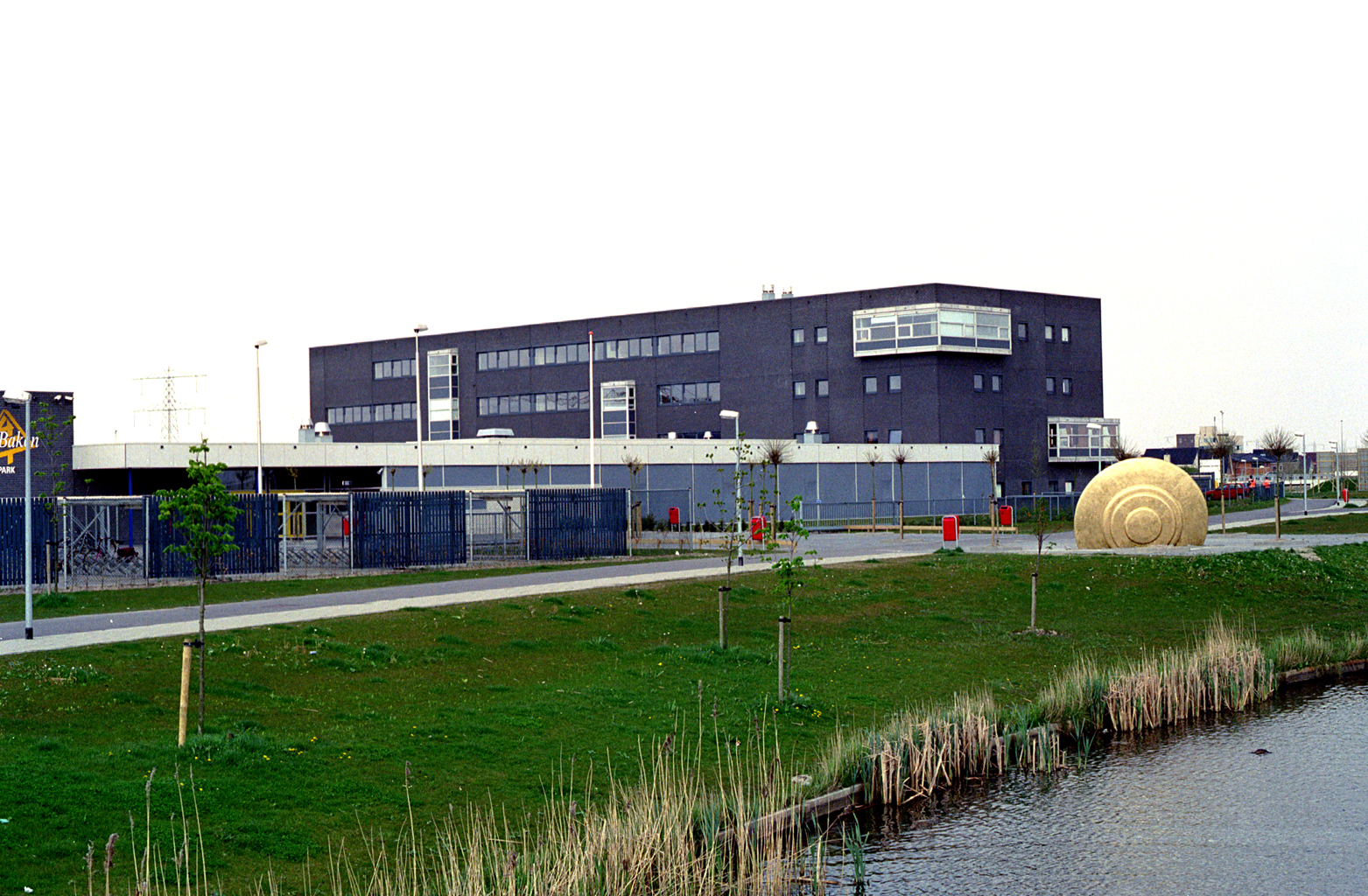 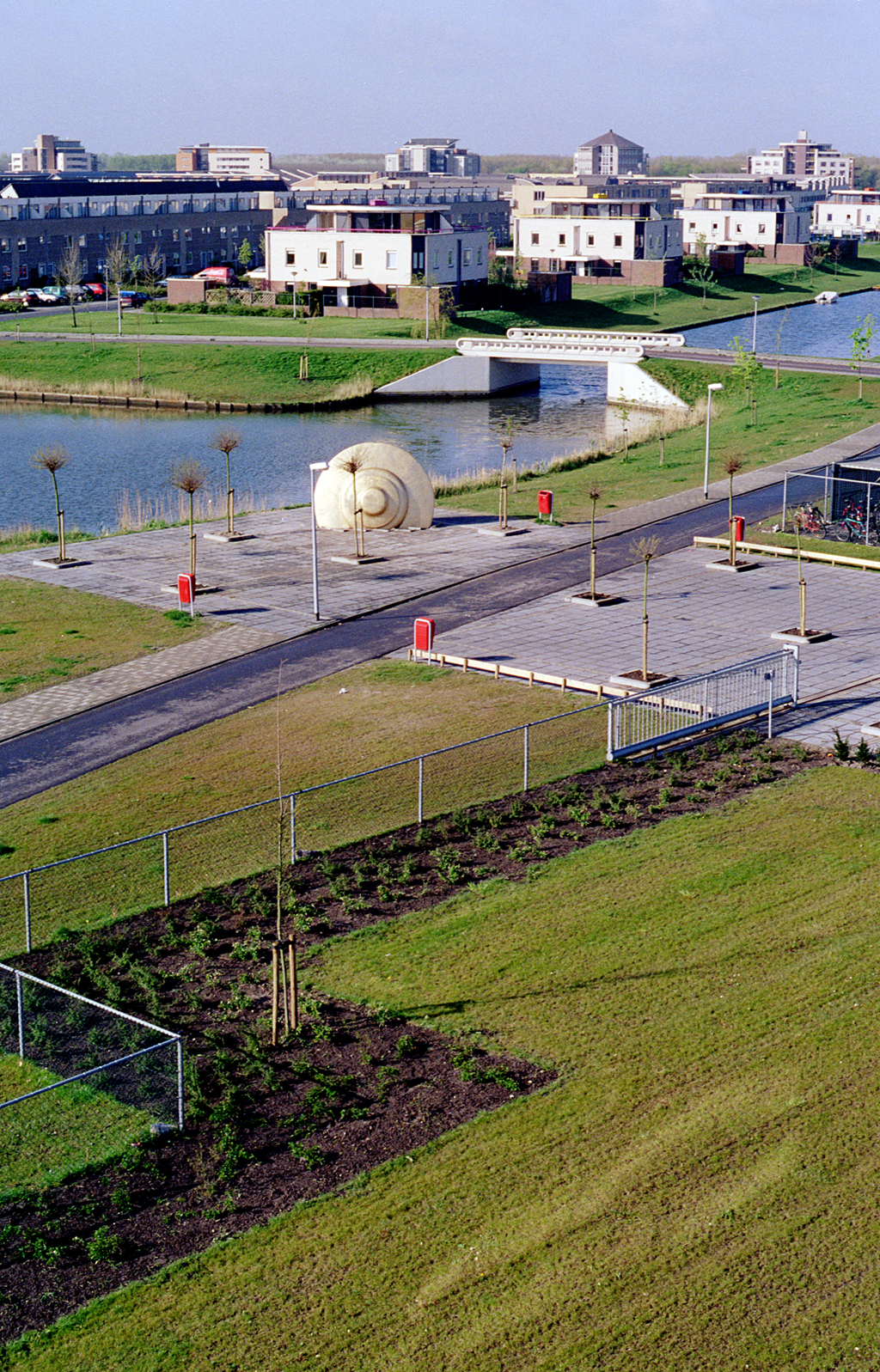 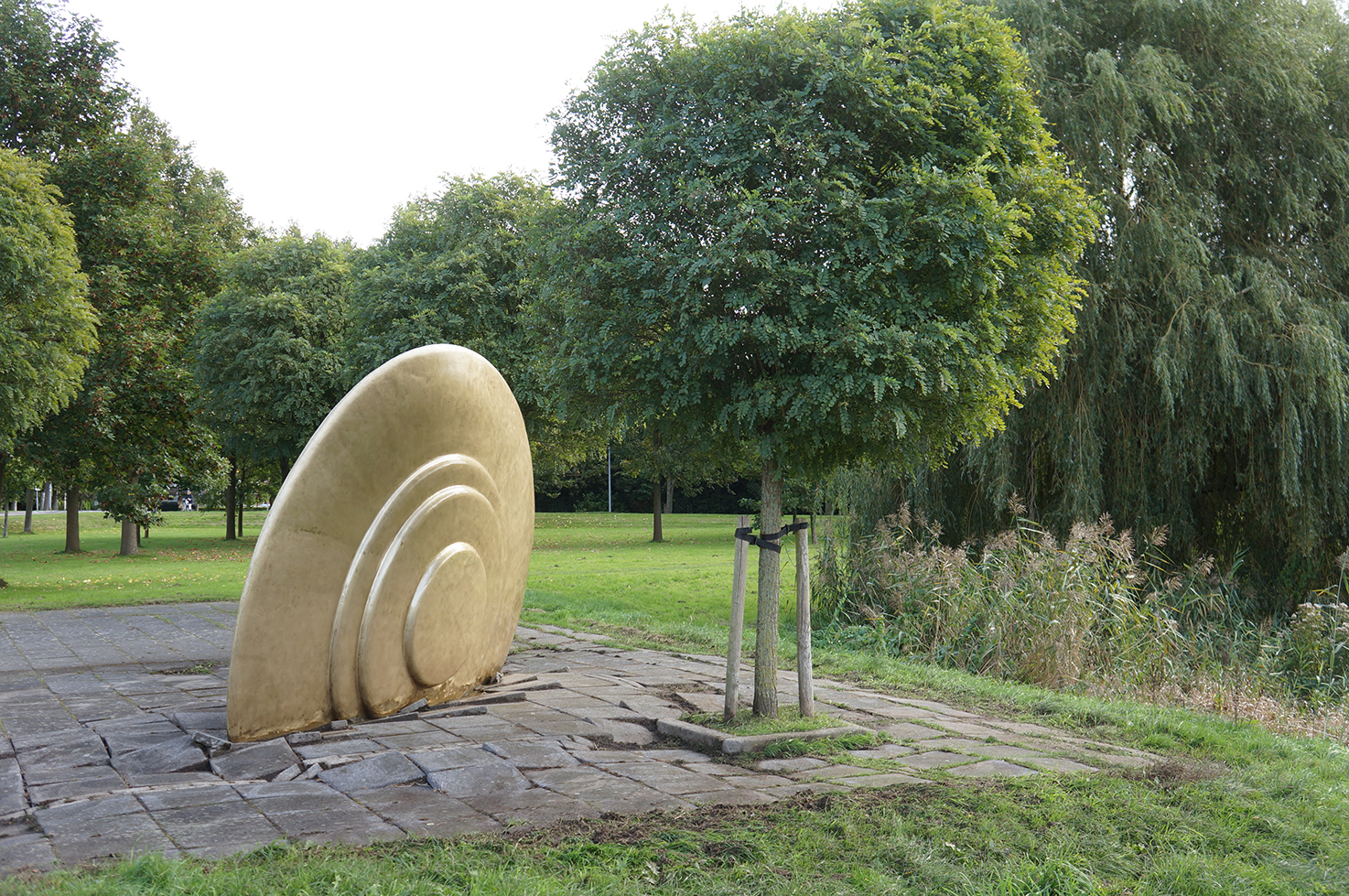 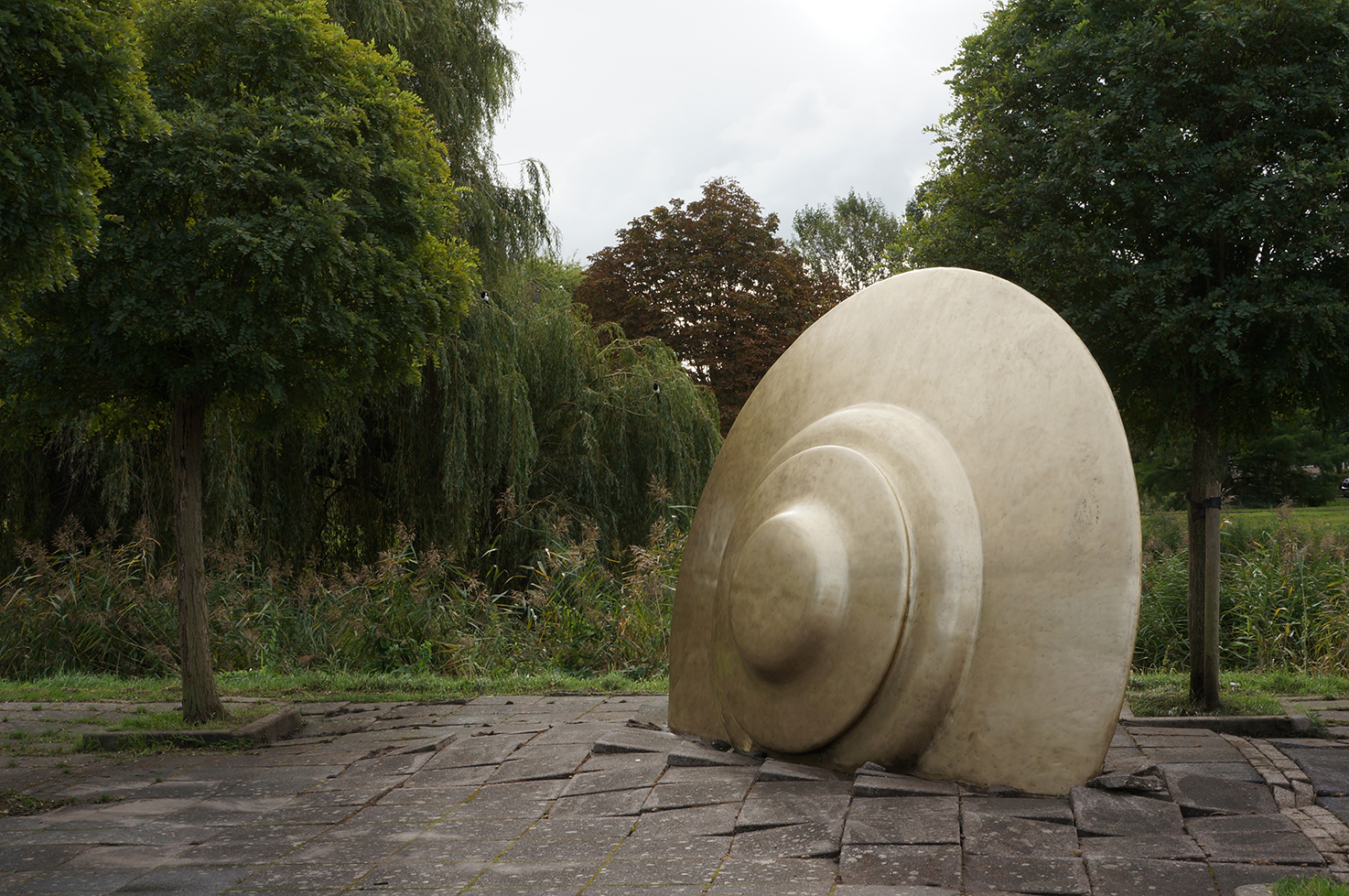 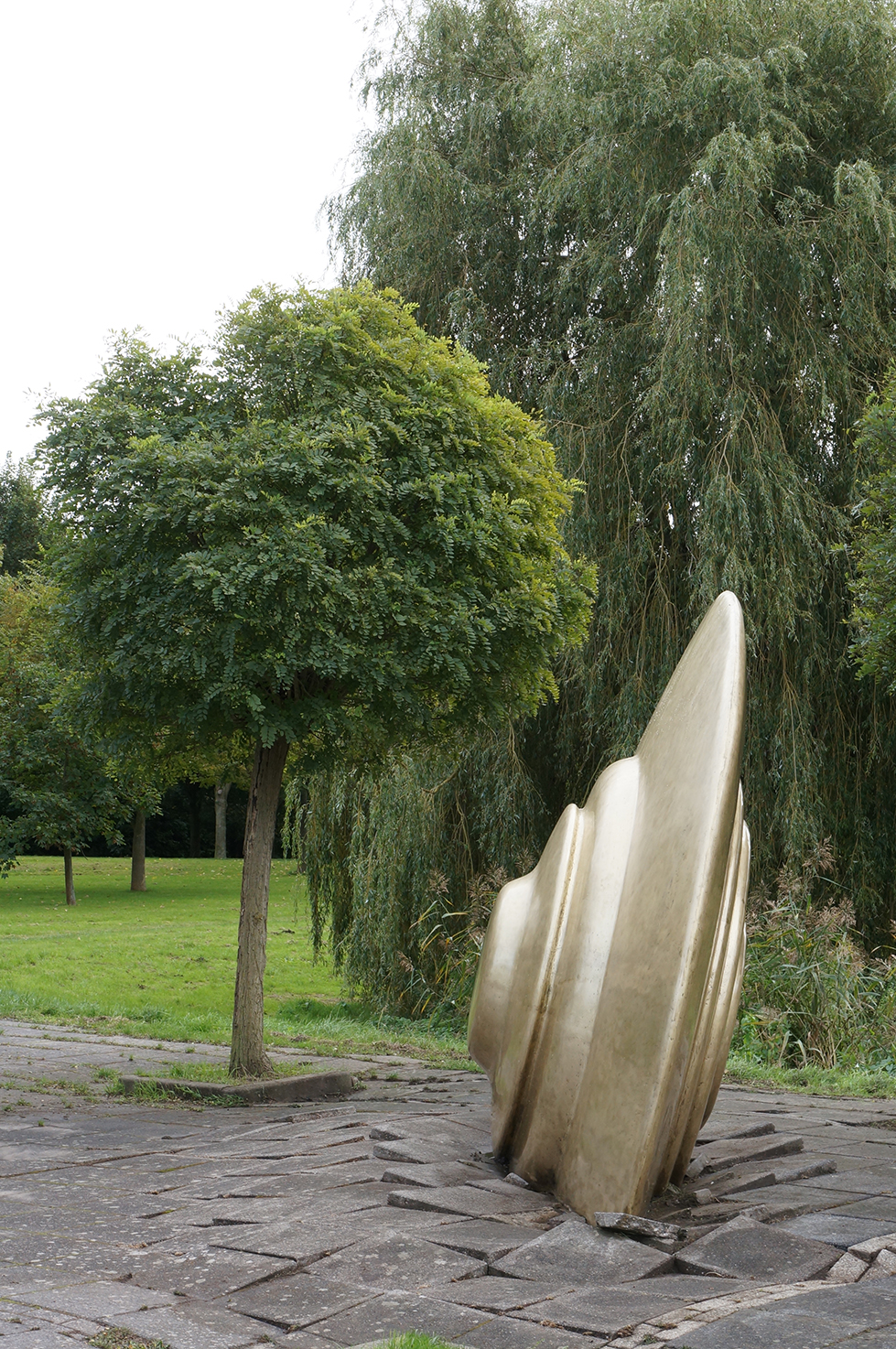 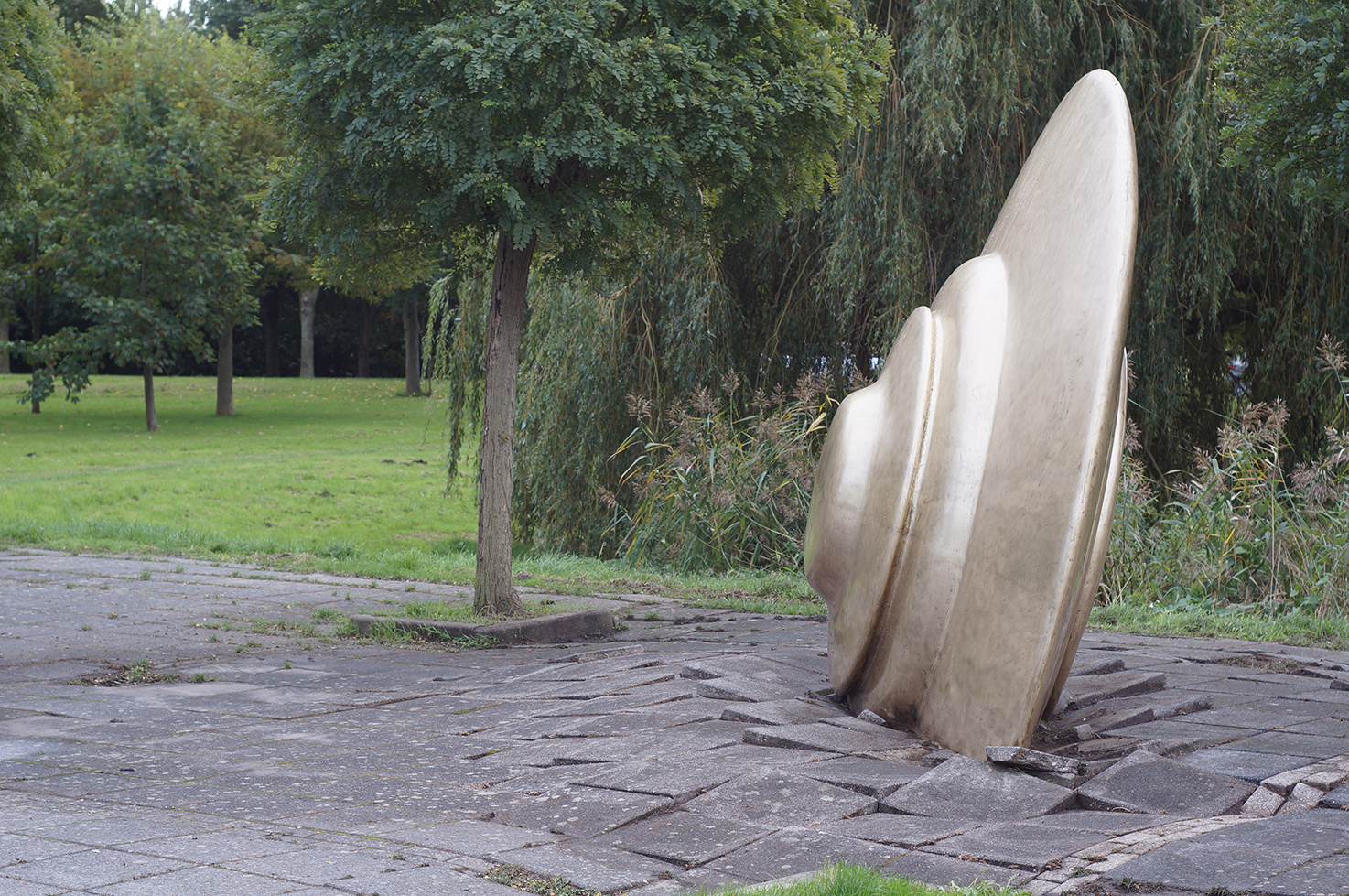 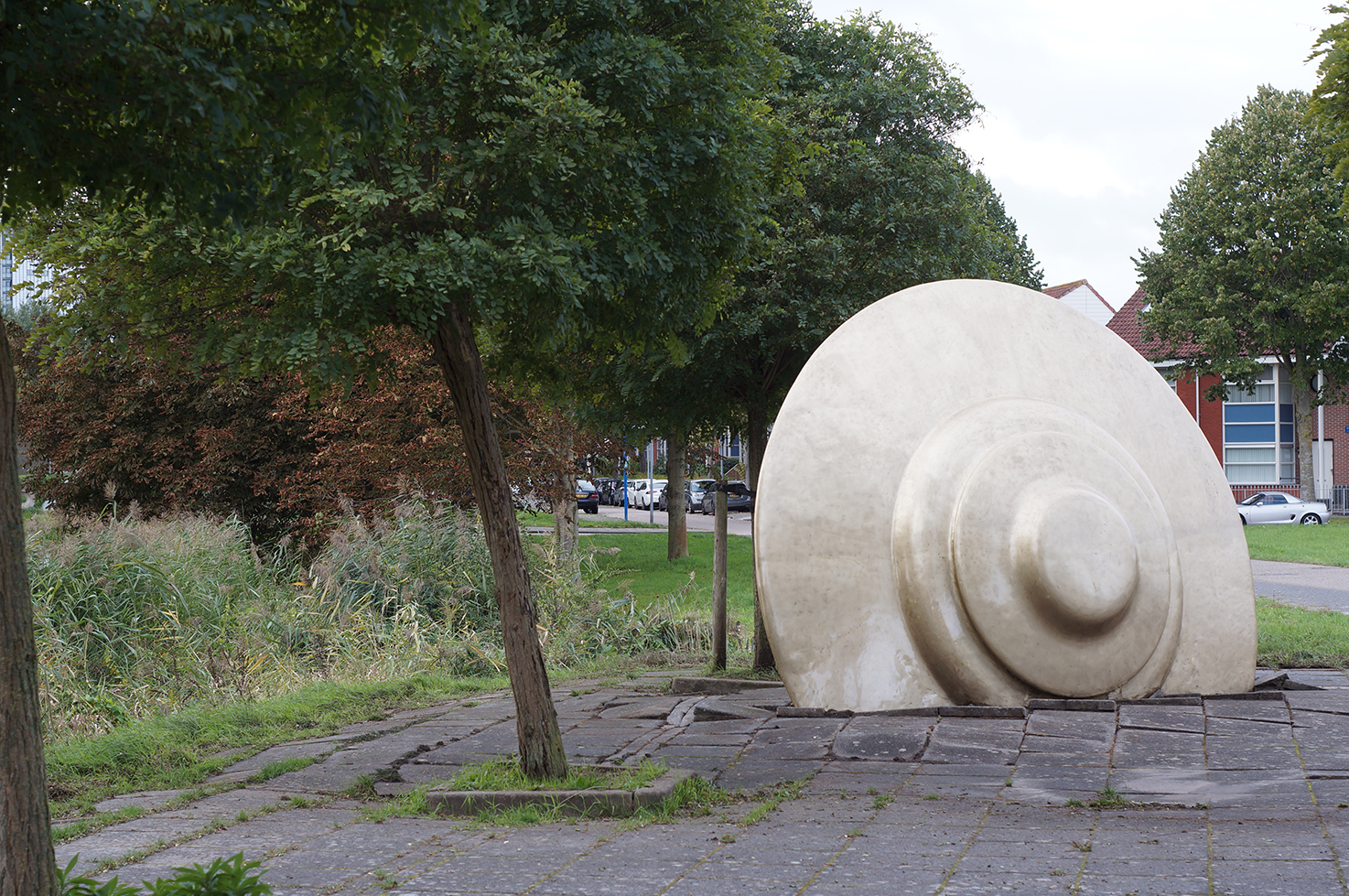 Commissioned for 'Het Baken', in collaboration with Foundation Kunst en Bedrijf. I decided to create a crash-scene for an golden unidentified flying object, fallen from the wide skies above the city of Almere.

The photos show the work when it was first installed in 1999, and later in 2020 after it was cleaned and restored

The headline could read “UFO crashes near Amsterdam” or “Alien aircraft unearthed in Holland.” Fallen (1999), a brass flying-saucer-turned-artwork, is the latest creation by Thom Puckey— his seventh monumental sculpture since 1989. The new work is the next step in a series that explores meaning and identity in public spaces.

Fallen is located in front of the entrance to Baken Park High School (Baken Park Lyceum), in the new city of Almere— 25 kilometers from Amsterdam. Built to relieve population pressures in the Netherlands, Almere, with its 140,000 inhabitants, rests on a 1000-square-kilometer land reclamation site born out of the Zuider Sea. The sculpture is part of the Regulation for the Support of Art Projects in Education. The organization Kunst en Bedrijf CV provided consultation, and Thom Puckey was chosen from a shortlist of four candidates and commissioned by the school. According to principal Victor van Zeeland, “We asked the artists to communicate with the students. Puckey interpreted our ideas and constructed his own surprising reality.”

Why a UFO? For Thom Puckey, the giant, pancake-flat landscape was inspiring. “The openness of the skies struck me. If I were a UFO spotter, I might go to this area because you have an ideal viewpoint. You can imagine a saucer flying at high speeds from one side of the horizon to the other.” Puckey explains further: “People talk about ‘the school with the UFO,’ and this gives the school an unusual identity. I think that’s an honorable intention for an artwork— that it can help to specify or identify something.”

The sculpture’s form is based on UFO “photos” taken in the mid-1970s by Swiss farmer Eduard Meier and published in UFO: Contact with the Pleiades (Phoenix, AZ: Genesis III Publishing, 1980). Thom Puckey says, “They weren’t authentic pictures but they were the most authentic-looking ones, with fantastic color. The pictures were archetypes, and I was very impressed by his work.” He fed the spaceship’s outline into a 3-D program and made a full-size plaster model. More than eight segments were required, which were then welded together. “At the end, I worked intensively to sand the form off. I wanted to make the sculpture as smooth as possible,” says Puckey.

Fallen is not a mere one-liner. “I love the idea of making a simple thing with a complex structure of intentions at the back of it, with a very complex number of associations. And I like to make works with elements of construction and destruction. Early on, I worked a lot with alchemy— using themes and symbols. My work has an esoteric side. Like most esoteric things, it’s better that you keep it hidden, but it’s there for those who want to find it,” says Thom Puckey. “In a sculptural sense, it’s an interesting way to deal with the pedestal, which becomes the actual ground. Instead of the object sitting on the pedestal, it’s poking out of it.”

Additional financial support was provided by the Mondriaan Foundation. The cost: 115,000 Dutch guilders (approximately US $54,800).